The New Pilot PodBlog Ep #14 - Podcast From The Cockpit 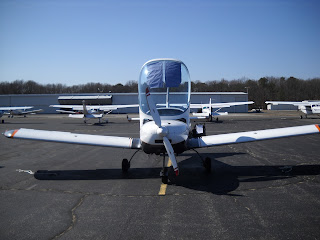 Hello everybody. This podcast I try something unique. I am doing the whole podcast from the cockpit of N385PR a PiperSport which I rent from Mid Island Air Service at KHWV. I was inspired by Nate Duehr aka Denverpilot from the Mile High Flyers podcast. He recorded the cockpit audio of a flight that he took with Zyola and Mrs. Denverpilot and released it as episode 15, Zyola Returns to the Sky. In this episode he let the recorder run and released it with out any compression of time or editing of the audio. I thought that was pretty cool and got me started thinking about doing a whole podcast from the cockpit.

This episode has been totally recorded from the cockpit of N385PR. I did a little editing and some minor compression. I tried to clean up the audio as best as I could but this is pretty much the audio as it was on my practice flight.

It was a pretty typical Saturday at KHWV. You will hear a lot of chatter on the radio and there are a lot of traffic in the pattern including gliders. If you listen closely you will hear pilots calling on the CTAF of other airports that share the same frequency as KHWV. Before I take off as I do my run-up, you will hear that there was almost an incident when a C152 took the runway when another Cessna was on final. That is why your head needs to be on a swivel especially at an uncontrolled field.

From the ATIS you will notice that the wind was 250@12 but the recommended runway was 15. This would be a tailwind. I was curious why we did not use 24 and briefly thought that I would ask to go to a runway more aligned with the wind but when I saw the limp windsock I continued on. Looking back, I should have questioned the runway and waited for them to switch the runway, which they did while I was on upwind.

To give them time to switch the runway and make it easy for me, I decided to to fly to the south practice area. You will hear me reference a diagram that I use to determine how to approach the pattern when  I say that I need to fly to the golf course. I have a laminated diagram showing how to enter the pattern for each runway. On it I have marked the checkpoint where I need to be to enter the 45.

The rest of the podcast you will hear me practicing landings and in the pattern. I try to add some comments on what I am seeing, thinking and what is going on.

I hope this gives you a good idea of what goes on during a typical flight at KHWV on a hot, summer Saturday. This is in real-time and you hear what I hear and hopefully get a picture of what I see.

Let me know what you think of this and if you like listening to pretty much unedited in-cockpit audio and if you would like me to do this again..

Remember I am not a CFI or professional pilot. So that anything I say or do in this audio, is not intended to teach. It is what I do as a relatively low-time pilot who is trying to not only stay current, but more importantly be more proficient. You are the pilot-in-command and if you have any questions ask your CFI.

Direct access to the mp3 is here
Posted by The New Pilot PodBlog at 11:19 PM No comments: