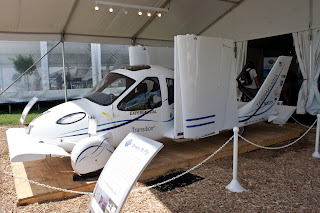 In this episode, I welcome John Telfeyan to the virtaul hanger for a chat about flying to Oshkosh. John is a VFR pilot and has flown to AirVenture 5 times. A couple by himself. John shares his experiences about flying to the big show, what he learned along the way and his thoughts on how to do it safely and succesffully. John as I said is a VFR pilot with around 500 hours and busts the myth that you need to be a high-time IFR pilot in order to fly to Oshkos. Listening to him talk, you realize that a realtively low-time VFR pilot can do it safely and successfully.

John also talks about his role in building Terafugia's rodable aircraft the Transition.It was an extremely interesting conversation on the safety feature, flight testing the production prototype and the new configuration of the Transition.

This was an enjoyable conversation where I learned a lot about the thought process of flying a cross-country flight. Just so happen the flight was to Oshkosh. I hope you enjoy it as much as I did and also learned a little about what it takes to fly to Oshkosh.

Direct access to the mp3 is here
Posted by The New Pilot PodBlog at 11:43 AM