In this episode I take you along as my flying buddy Dave Torrente and I fly the up the Hudson River on what is known as the City Tour.
We transversed the New York Class B Airspace Hudson River Exclusion Special Flight Rules Area (SFRA), flying northbound with Manhattan on our right and NJ on our left.
This is another episode in my series on things that a pilot can do besides the $100 hamburger after receiving  his or her PPL.
What you will hear is the cockpit audio as we flew from HWV along the south shore of LI, past the rockaways and Coney Island, up and over the Verrazano bridge, past ground zero where we saw the new 9/11 memorials and freedom tour, past governor’s island and the statue of liberty.  We continued up the Hudson past the Intrepid with the Concord on its deck, past Yankee stadium, over the GWB to the Alpine tower which marks the end of the exclusion.
The cockpit audio is pretty much unchanged. I did remove some dead air but the running time is pretty close to the actual time of the flight. I did break into the audio with some comments, but I want the listeners to experience what it would be like to fly the New York Class B Airspace Hudson River Exclusion Special Flight Rules Area (SFRA).
So what is the SFRA? The exclusion is airspace that has been carved out between EWR, LGA and JFK airspace and goes up the Hudson and east river.
Up until 2009 it was known as the Hudson River Class B exclusion and the rules of the road were not mandatory.  On November 19, 2009 the FAA issued an amendment to Part 93 which established a Special Flight Rules Area (SFRA) and defined operational procedures for pilots within the SFRA. This made the rules of the road such as where to fly, the altitude to fly, the speed to fly at and what and where to communicate became mandatory. This came about after a mid-air collision in 2008 between a fixed wing aircraft and a helicopter.
What I hope that everyone takes away from this podcast, is that if you prepare correctly, follow the rules and fly the airplane, you can easily handle flying near and through some of the busiest airspace in the world.  A low time or high time pilot can add flying the Hudson Corridor as one of the things that can be done after getting his or her certificate. 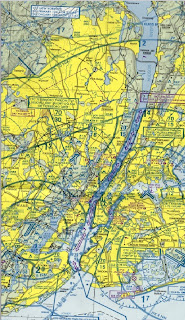 Check out the pictures from the flight at My Facebook album of the flight
You can find information about The Long Island Soaring Association at http://longislandsoaring.com/
Shoutouts:
A shoutout to Dave Torrente (@DJTorrente). Every flight I take with Dave is fun. At least this time we were able to complete the flight and share it with a student pilot. Our next planned flight is back up to KASH for the UCAP meetup on February 25.
Blue skies and tailwinds always.
You can reach me at TheNewPilotPodBlog@gmail.com
Please send comments and suggestions.

Direct access to the mp3 is here
Posted by The New Pilot PodBlog at 11:03 PM