In this episode I welcome Alex Turnbull into the virtual hanger. Alex is a mountain flying instructor at the Wakatipu Aero Club in Queenstown, New Zealand. This is another episode of what you can do with your certificate aside from the typical $100 hamburger or pancake breakfast flight.

Listen in as Alex talks about mountain and remote strip flying in this unique and challenging airspace. He also talks about the unique requirement of private pilot training in New Zealand, hint it involves mountain flying.

I hope Steve and Grant from the Plane Crazy Down Under podcast don't get angry with me for encroaching on their part of the world.

Below is information from Gareth Allen, in charge of promotion for the club, on the club itself and the area.

The aero club flies four cessna 172s, a cessna 206, and a Tecnam P2002JF. Most of the club revenue comes from flights into Milford Sound, a popular scenic area, with a challenging approach and landing
at Milford Sound airstrip. The strip itself is 1800ft long, at the intersection of two valleys and the sound itself, producing a washing machine of turbulence, and an awkward traffic pattern. On busy summer days the airspace can get quite busy, with Islanders, Caravans, and smaller planes shuffling tourists in and out from Queenstown. Weather in the area is quite changeable, making the flight impossible roughly a third of the days during the summer, as all tourism operations are done under VFR. Often when weather is marginal, some passes into the area will be closed, making local knowledge of the network of creeks and valleys in and out of the sound essential.

Flight training makes up the rest of the club's income, with a mixture of overseas and local pilots earning PPLs, CPLs, and doing mountain flight training. There is no instrument flight training at Queenstown,
as the IAFs are all at ~10k feet, and the DHs at 4000 (runway elevation is 1200ft). The specialty here is mountain flying, as every flight that leaves Queenstown interacts with the mountains, and there
are an almost endless supply of new valleys to explore. A few dozen remote strips of ranging difficulty within a half hour's flight round out the saddle-crossing, low flight, and contour flight training.
There's also a beach landing strip 40 minutes away, for beach operations training.

Given Queenstown's reputation as the "adventure capitol of the world," many tourists want an aviation experience that is less scenic, and more exhilarating. The club gives trial flights daily during the
summer months, mostly to foreign tourists, through the river valleys and back over the lake to Queenstown. At the high end of the adrenaline spectrum is the aerobatic flight, using a Pitts Special.
The Pitts is known for being extremely difficult to fly, and especially to land. It can't be landed with a "wheel landing" and instead needs a three-point landing. At that flight attitude there is zero forward visibility, meaning that pilots must use peripheral vision to keep lined up with the runway and avoid ground looping.

Here is a short video showing one of the local strips the club uses for advanced strip training:
http://www.youtube.com/watch?v=hCZs91EYI-k 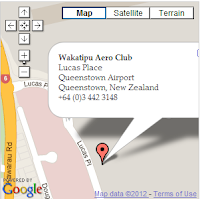 The intro and closing song is called On The Run 1 and it is by www.pacdv.com/sounds/

Posted by The New Pilot PodBlog at 4:06 PM